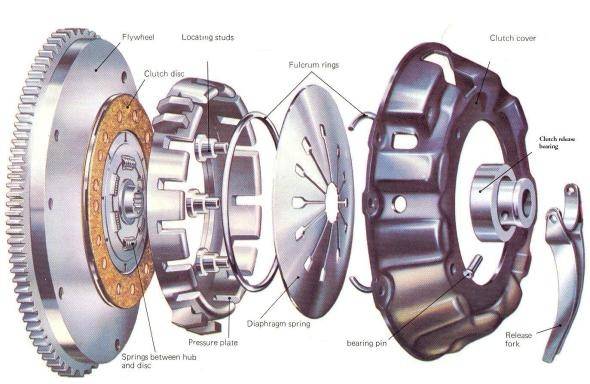 The cars need to have a clutch. The reason is that the #engine stays rotating while the wheels are stop at the same time ,

Thus there is no need to turn off the engine when you need to stop the wheels from moving. In addition, the #clutch allows for a quiet transfer of motion from the axis of the engine, which continues to spin continuously to the axis of the #gearbox.

Clutch is the first step in the transmission #mechanism in cars that operate in a manual gearbox (not automatic). The clutch transfers the engine’s power to the gearbox. It separates the mechanism when the driver selects a gear to move the vehicle from stability or when the gear changes when the speed changes by the driver during the movement of the vehicle. Most cars use a #friction clutch operated either hydraulically or by wire rope , which is the most common. Returning to the clutch, it relies mainly on the principle of friction between the clutch plate and the flywheel.

The vehicle clutch consists of two pressure disks, which are mounted on the motor-connected terminal and the friction disc (or clutch disc) that is connected to the driving mechanism. The clutch is in an interlock position when the friction disc and the pressure disc are in contact and the vehicle is in the position of motion. The pressure plate fitted with screws with the hinge applies a constant force to the friction disc associated with the input shaft, which in turn transmits the movement to the gearbox, meaning that the two disks are in contact mode.

When the clutch is detached (by pressing on its pedal), an arm presses the bearing towards the center of the clutch, which causes the compression force to stop. The external part of the pressure disc, which has a large friction surface, is far away and no longer connected with the friction disc at all. In other words, the pressure disc has been pulled away from the friction disc, which separates the clutch from the rotary motor and makes it non-interfering. In this way the movement is stopped from the mechanism of movement and we can change the gears according to the speed required.

There are springs in the clutch disc. These springs are used to help absorb shock caused by interlock