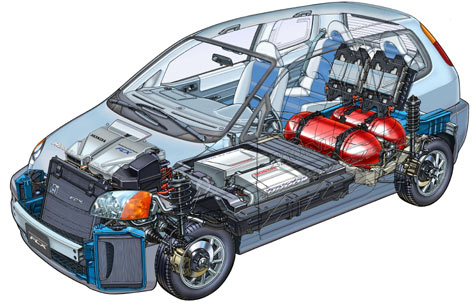 although the work of fuel cells can be likened to chemical batteries. However, the difference is in the fact that fuel is present inside the batteries,and supplied with fuel like internal combustion engines. Hydrogen is generally used as fuel in these cells
Proton exchange membrane fuel cell These cells use carbon solid polymers as an anode and electrolyte containing a catalyst such as platinum

These cells consume hydrogen as fuel from the storage. When the hydrogen gas molecule collides with the platinum-containing anode, the hydrogen loses two electrons and turns into protons that run in the electrolyte towards the cathode. The electrons in the circuit consists an electrical current until they reach cathode there they meets the protons and the atomic oxygen , a chemical reaction takes place producing a water and amount of heat

The disadvantage is : High cost and it goes bad by Carbon monoxide